The Elanien Kingdom [...] must be mutually helpful and close to nature in order to survive, since it is in nature that the Elaniens [can] find incredible powers for photic weaponry. 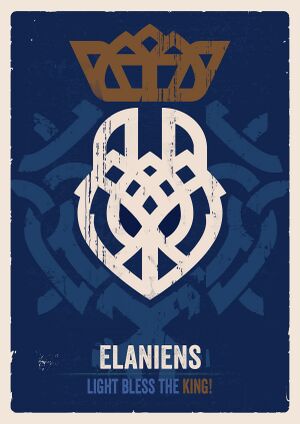 The Elanien logo and motto.

The first Elaniens fell into Kwalat from a portal in what is now thought to be the Valley of Sins. The survivors found lodging but they were still unsafe from the crawling murk at night. Rangers learned how to become one with nature and discovered new villages for the community. These villages created various light-emitting contraptions, pushing back the murk.

Once, beasts of all kinds fell out of the portal. This forced the rangers to lead survivors to the safety of the river, where they set off overcrowded rafts downstream in search of salvation. Eventually, the Elanien refugees gathered on rocky islands. Using the last of their supplies, they hosted a communal feast. At that moment, the Elaniens crowned their King - a hero who led them from the clutches of death. The Elanien King's crown was a hoop from the first wine barrel opened during the feast. The coronation site is now known as Leitana - a community built atop the cliffs. The king still rules Elan to this day.

"The power and splendor of Elan are in the devices that harness the energy of plants without causing harm. Elanien technologies are impressive in their magnificence: ornately woven metal, containing the deadly force of light particles."

The strength of the Elaniens lies in their unity: everyone is held accountable for everything. They don’t think of themselves as owners of Elan, instead viewing themselves as part of a complex ecosystem. Their main principle is to protect the forest and to never disrupt the natural order of things; consequences may be unpredictable. Elanien keepers are responsible for sealing away chaotic objects or monsters created by the portal.

"The dense and endless forest of the Elanien kingdom might remind you of an eerie folktale. Predators with razor-sharp tongues lurk in the underbrush, charming water-maidens called Vodyanitsya lure in unsuspecting passersby, and the crowns of trees abound with nests woven of bones. But underneath the creepiness of it all, you’ll find that everything falls into a natural order. To survive in these lands, you must respect the interconnections that make this ecosystem work, you ought to watch each other’s back, and you need to guard these dreadful woods - with all your elanien might - from something far more terrifying."

Light-powered beacons light up the thicket, providing defense against the murk, and welcoming wanderers. Most foliage is decorated with lanterns. At the capital entrance, guards with powerful weapons patrol, and towers illuminate the area with bluish rays.

To the east lies the Valley of Sins, made entirely of flesh and blood, consuming everything within its reach. Its ugly creatures are manifestations of human instinct. Elan is protected from the Valley by Luceaiders.